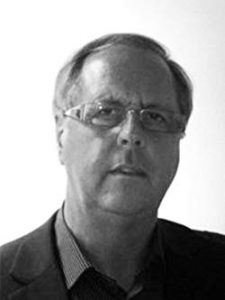 I was born and raised, long years back now, in what was then the small, Midland’s town of Tamworth but once I’d left for university, where I read Economics, I never returned.

I married a girl whom I’d met at uni, and we did a short stint in London after graduation. It didn’t really work for us and, by our mid-twenties, we were settled into the small, once fishing, now touristy, village of Polperro in Cornwall where Annita originally comes from.

We lived there for 42 years, in the same house, before recrossing the Tamar to settle in Devon only a little while back. It was my time in Polperro that provided a rich source of material for my first novel, ‘Midsummer Dreams’, a lyrical history of the lives, loves, and, in particular, the dreams of several of the inhabitants of a small Cornish village. The experience is also responsible for my novella, ‘Legend’.

I’ve harboured literary ambitions right from my university days; they’ve just been slow in coming to the fore, that’s all. Well, that’s how I like to think of it anyway.

During my three years at uni I wrote quite a plethora of poems, all of which, fortunately for both myself and mankind in general, have been lost. In all honesty, they weren’t that good even if I did think they were at the time.

Between then, and recently, I’ve made a couple of half-hearted attempts at writing a novel, but nothing ever came of them which wasn’t all that surprising. I never gave them the attention they demanded but then, I was preoccupied with other things such as the day job and children, not to mention several cats, oh, and being flooded. Twice. Things like that.

I didn’t start writing in earnest until I was a couple of weeks short of my 69th birthday. Still, better late than never, as my mother used to say.

Annita had put the idea of me writing a novel into my head twelve months or so earlier but as I was still working at the time, I left it to roll around for a while and then a while longer.

It wasn’t until January 2017 that I began work on my first, serious piece, the novel, ‘Midsummer Dreams’, and eight months later had a rough draft ready although it still needed a lot more work to complete it.

‘Midsummer Dreams’ was published in March 2020, not the best time to have chosen considering we were heading into the first lockdown which proved a bit constraining, to say the least, in terms of being able to physically promote the work.

These days, I’m retired from the day job although writing has become a part-time occupation.

This Site Is Protected By
Shield Security →